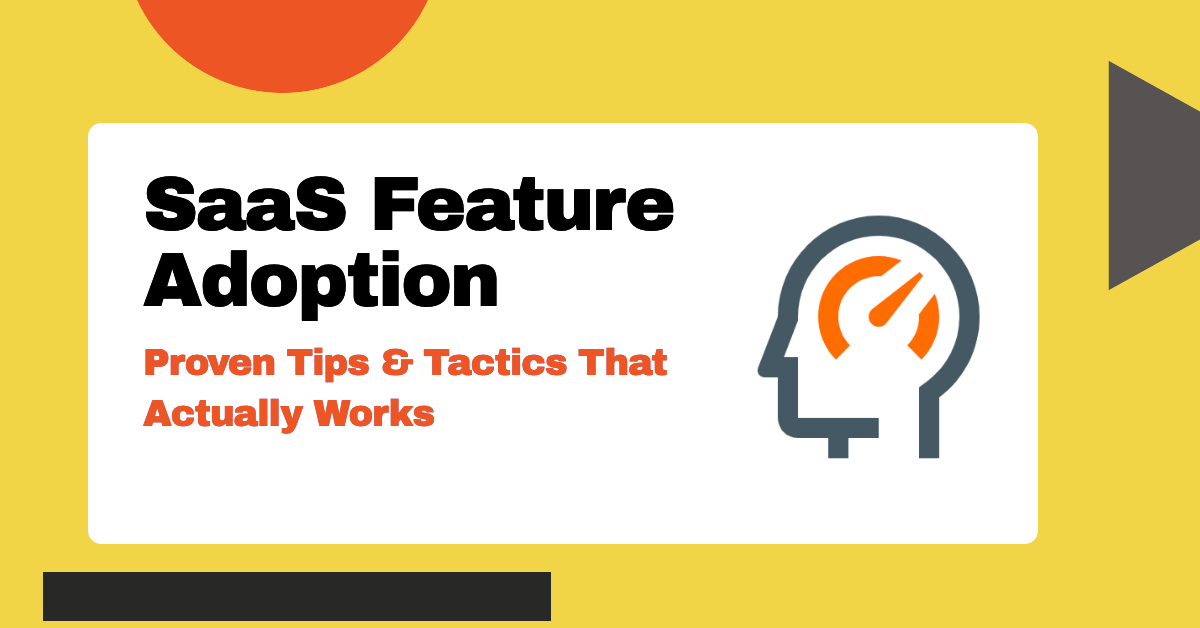 So, you released a new feature, but your users aren’t particularly keen on using it?

You’ve tried several easy-to-follow tips – shared the new feature in your newsletter and with your Facebook audience, but you’ve got zilch. Seems like you need to amp up your feature adoption efforts, but it’s hard to decide where to start.

This article will steer you in the right direction.

Before we proceed, let’s get back to basics.

What is feature adoption and why is it important for growing your SaaS?

Why is it important? Well, you’ve probably spent both time and resources on developing your new feature, right?

You know your users would get great value from it, which will, in turn, make them stay in your app longer. By improving your customer retention, you will increase your user engagement and ultimately increase your MRR/ARR.

In a subscription-based software licensing world, you have to keep your users coming back each month. They need to get value from the product continuously, so they don’t turn to your competitors (and we all know how competitive it gets).

You might bring value to your users with each new feature – but announce it wrong, and they might miss it. That’s why it’s so important to get your feature adoption tactics right.

Before you start implementing tactics for feature adoption improvement – you should know which metrics to follow.

How to measure product adoption for SaaS?

Measuring product adoption might seem easy – either users use your new feature or not. While that definitely is one of the ways to measure it, it isn’t too effective. In order to track product adoption effectively, you need to track several different metrics:

Breadth of adoption: This tells you how widely has a feature been adopted across your user base or targeted user segment. Do a majority of users use your feature or only a few of them? By measuring the breadth of adoption, you get some insight in the initial appeal of your new feature.

Depth of adoption: This shows you how often your users utilize the new feature. Do they use it in the way you expected it to be used? Or are they using it differently? From it, you can learn whether users really need that feature, or if they need to use it, but in a different way. Or maybe it’s too difficult for them to include it in their workflow. That’s why you should keep an eye on it and ask your users for feedback.

Time to adopt: This measures how long it takes for your users to begin using the new feature. Do they try it out right away, or do they take weeks to try it out (worst case scenario: they’re bored at work, so they start trying out new features just to waste time). If they try it out sooner rather than later – it means you’ve pinpointed their pain points and needs accurately.

Duration of adoption: Now that they’ve discovered the new feature, duration of adoption will measure how long they actually continue using it afterward. Did they just try it out and then forgot about it. Or did they keep coming back to it? This tells you whether your new feature provides any real value to your users, or they were just entertained by it because it was new.

Let’s do a quick recap of the importance of a good feature adoption:

One of the most effective ways to introduce your users to a new feature is to launch an in-app product tour.

A well-thought-out product tour can be a powerful tool when introducing new features.

Make an announcement about your new feature for your users when they log in. Create a short product tour that will show them how to use the new feature and what value they get from it (ie. how much time it could save them, how it enhances their workflows, etc.).

💡 The best approach is the personal approach.

Take your time and segment your users wisely. Target only the users that will get real value from that feature. Every feature has its user, you can’t expect all your features to be relevant to all of your users.

If you’re launching a feature that’s relevant for ie. account owners, then reach out to them directly and offer them a short demo walkthrough that will show them the values they get from that feature.

3. Announce and market your new features across different channels

But don’t overdo it. Don’t be aggressive.

Announce it in a discreet, but enticing way.

As we mentioned in the beginning of this article – what isn’t measured, can’t be improved.

Before feature release, determine KPIs that will measure the success of your new feature. One of the KPIs we find most useful to measure are:

One last time – and we can’t emphasize this enough – measure your feature adoption. If you don’t measure it, you won’t know what to improve.

Even if it’s the worst-case scenario – your users simply don’t see the value in your new feature – that’s also a result. Now you know you should shift your focus on features that matter to your users, and ultimately to you, too.
It’s a long process indeed, and requires a lot of effort – but if you find it too difficult (or too tedious), book a call with us, we’d love to take on a challenge.